Singapore, 29 July 2012 - Larasati’s Traditional, Modern & Contemporary auction was a huge success, achieving S$1,315,099 in total sales (including premium) yesterday with 96% of 53 lots sold and 90% of total lots were sold above estimate. Two new records were set by the established masters of Southeast Asian art at the auction; A Kerosene Lamp in Sanur by Arie Smit raked in S$21,960 (including premium), making this the artist’s most expensive auction sale for small-sized still life work, and S. Sudjojono’s View of the roadside, Cipayung became the most expensive work of the artist’s landscape series on Java at S$176,900 (including premium).

The ‘Underrated Masters’ – a term coined by CEO of Larasati, Mr Daniel Komala for artists whose works he considers are on par with the old masters but are currently undervalued by the market – earned their long-awaited recognition at the auction. The Fruit Market by Basoeki Abdullah was sold for S$29,280 (including premium), four times above pre-sale estimate.

The most expensive lot of the sale is by Sunaryo, whose Behind The Stage started its auction price at S$95,000, but took a big leap with the first bid from the floor at S$150,000, and culminated with the piece being hammered off at S$219,600 (including premium). Srihadi Soedarsono’s three works on sale - Dinamika Legong, Melasti – Praying for Love and Peace and Krakatau – were among the lots commanding top sale prices.

These artists, touted to be the next icons for South East Asian art, and recognised as ‘Living Masters’ by Mr Komala; are artists that are younger but has the potential to become the next generation of established art icons, also known as the ‘Old Masters’. The ‘Old Masters’ maintained their stalwart position, with a great performance from established names like S. Sudjojono, Affandi and Arie Smit.

Over 120 people attended the auction in a crowded sale room at Marriot Hotel, a testament that the ‘boutique auction’ concept is well-received in the Singapore market. The sale room was filled with intensity and drama, as price wars emerged from the fierce bidding of buyers, with bouts of applause breaking out at the drop of the hammer for some pieces, such as Affandi’s Perahu Kusamba and Srihadi Soedarsono’s Dinamika Legong. The auction also saw phone and written bidders vying for the lots.

Commenting on the success of his latest auction, Daniel Komala, CEO of Larasati Auctioneers, said, “I am very happy with the sale – the turnout is good, we sold almost all our pieces and achieved two price records at this sale. The atmosphere in the sale room was buzzing and alive with competitive bidding - there were many familiar faces, as well as new collectors. The sale results are a strong indication that the market will continue to do well in spite of the economic uncertainty as buyers continue to look to the ‘Old Masters’ as solid blue chip investments, while the ‘Living Masters’ and ‘Underrated Masters’ are emerging to be the next big wagon in the art scene.”

‘Living Masters’ and ‘Underrated Masters’ performed amazingly well, with works from  I Made Sukada, I Gusti Made Roepet, and Leonardus Joseph Eland, starting off at prices as low as S$300, but were all eventually bought out above their pre-sale estimates.

“The attractive price tags on Living Masters and Underrated Masters are very suitable for people starting to collect art, as they are quality works backed by strong names, priced affordably and make for great investments,” said Mr Komala. 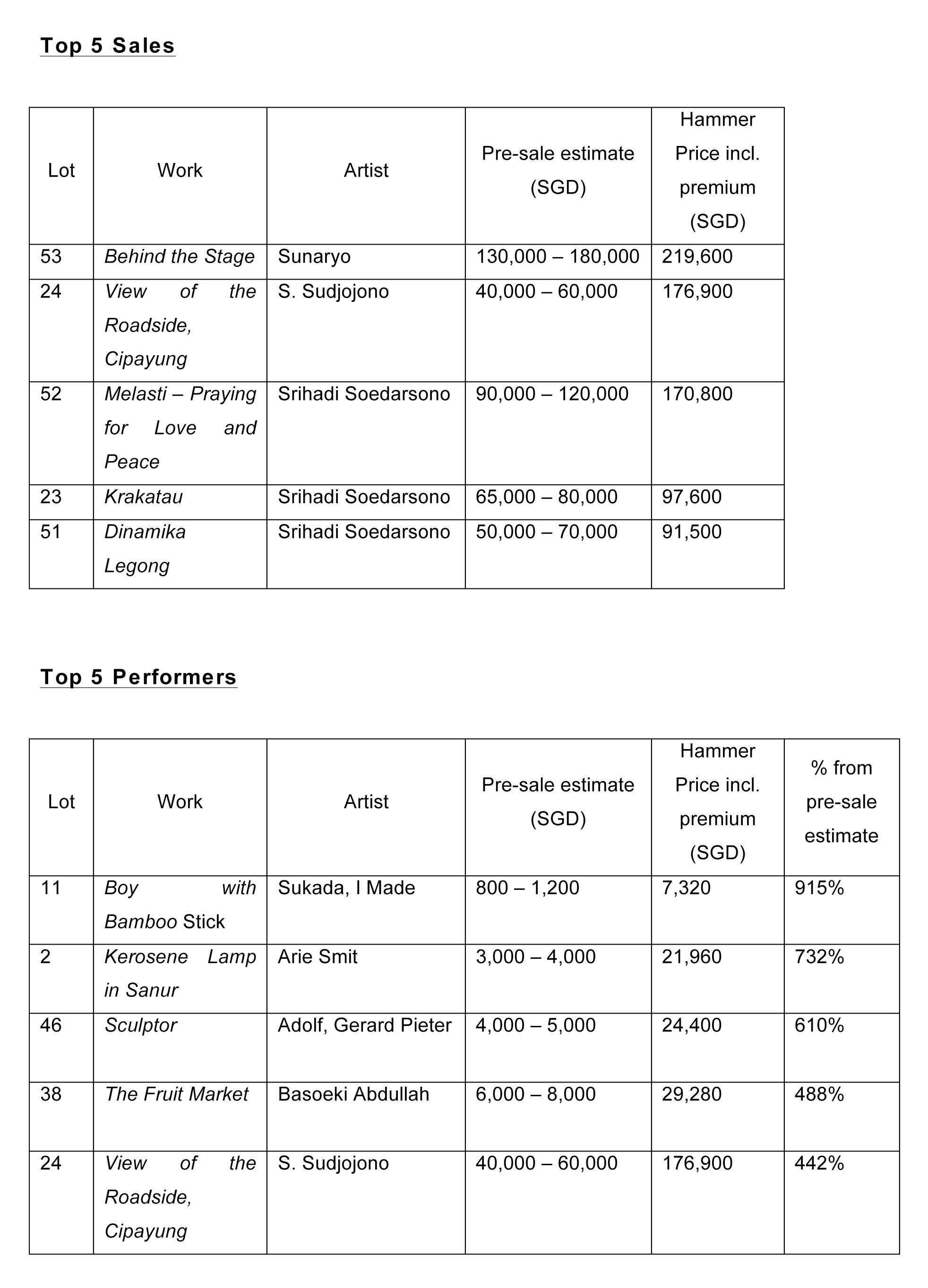